Former Liverpool player Jamie Carragher has revealed that he would prefer to have seen Arsenal compete in the Champions League this season instead of Tottenham Hotspur.

Antonio Conte led Tottenham to a fourth-place finish in the Premier League in the previous campaign following a late surge at the tail end of the season in  a run which saw them beat the Gunners 3-0 in the north London derby, which helped them to begin their comeback to overtake their rivals following Arsenal’s defeat at Newcastle.

The two north London clubs have started their current season strongly, with Mikel Arteta’s side looking to be in impressive form and are curently top the table. Spurs are following their bitter rivals closely behind, but their performances have not been great in the last two matches.

Conte’s team have shown that they can get favourable results despite not performing up to their best having stolen a point at Chelsea in injury time and managed to beat Wolves 1-0 despite creating very little.

Carragher expressed how he would rather have wanted Arteta’s club to be in the prestigious European competition because of the way they have revamped their squad in recent campaigns. The ex-Liverpool defender also pointed out the work the Spanish manager has done at Emirates to make his case.

Writing in his column for The Telegraph, Carragher said: “It was also essential Arsenal signed another left-back in Oleksandr Zinchenko. Lack of cover for Keiran Tierney cost them the Champions League place last season.”

“With respect to Tottenham Hotspur, I was disappointed when Arsenal did not do it last May because it would have been a fitting reward for how Arteta has gone about rebuilding the club – sticking to a plan with bold and occasionally contentious decisions which inflicted short-term pain in pursuit of long-term gain.”

“There was a lot of debris to clear when Arteta took over at Arsenal, not unlike those who have been appointed at Manchester United over the last ten years. The clubs make for contrasting case studies in how best to recover their former standing.”

Carragher could have his preference, but Tottenham were the ones who deservingly got into the competition. What Conte did at N17 should not be overlooked as he overturned a disappointing situation without enjoying much support as only Dejan Kulusevski and Rodrigo Bentancur joined their ranks mid-season.

Spurs did not have the greatest depths within their squad either, just like Arsenal last season. Carragher’s claim that the Gunners failed to qualify for the CL due to a lack of options does not hold much weight when their rivals were in a similar boat.

Report: Arsenal could be set to enter race for centre-back who is among Spurs’ top targets 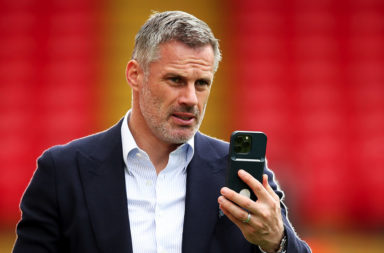 Report: Spurs focus on other Brazilian as Arsenal intensify move for Raphinha